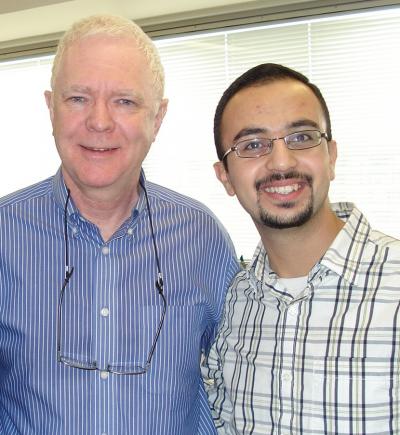 Vanier Scholar Mohamed Soliman at Mount Sinai Hospital and the University of Toronto has discovered that a protein, known until recently as part of a complex communication network within the cell, also plays a critical role in regulating glucose metabolism and cell growth. As a result, this protein, known as p66Shc adaptor protein, may be a new target for the treatment of cancer and diabetes.

Mohamed and his colleagues became interested in studying p66Shc following research that showed this protein acted as a mediator of insulin sensitivity in mice. In a study designed to understand the mechanism involved, they found that silencing p66Shc not only enhanced glucose metabolism, but also increased overall cell growth. "Our work suggests that p66Shc acts to suppress insulin signaling and energy metabolism when glucose levels are high as in the case of diabetes," says Mohamed.

The study was recently published in the journal Science Signaling.

Mohamed's research is focused on understanding how signaling within and between cells controls cell growth and metabolism. Both processes are tightly controlled in our cells. When these functions are disturbed, diseases such as cancer and diabetes occur. "My research is driven by a profound fascination with the molecular components of human biochemistry and a strong desire to research in depth and at the cutting edge," says Mohamed.

Mohamed was supervised by the late Dr. Tony Pawson, a pioneer in the field of signal transduction. He is currently completing his PhD in the lab of Dr. Jim Dennis at the Lunenfeld-Tanenbaum Research Institute at Mount Sinai Hospital.

"My research is driven by a profound fascination with the molecular components of human biochemistry and a strong desire to research in depth and at the cutting edge."
— Vanier Scholar Mohamed Soliman, Mount Sinai Hospital and University of Toronto