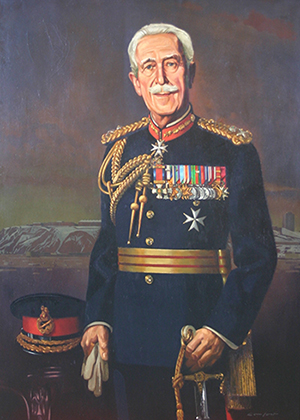 On August 1, 1959, Major-General Georges P. Vanier became the first francophone Governor General of Canada. He was appointed by Prime Minister John Diefenbaker due to his devotion to Canada as a soldier in the First World War, his diplomatic services overseas, and his commitment to bilingual unity within the country.

"Canada owes it to the world to remain united, for no lesson is more badly needed than the one our unity can supply: the lesson that diversity need not be the cause for conflict, but, on the contrary, may lead to richer and nobler living. I pray to God that we go forward hand in hand."

Born April 23, 1888, Georges Vanier was raised in Montreal, Quebec. After graduating from high school, he entered Loyola College and earned a Bachelor of Arts degree in church devotional fellowship in 1906. He then attended Université Laval and received a law degree in 1911. Although he was called to the bar that same year, Vanier contemplated becoming a Catholic priest. But he decided to enlist in the Canadian army during the First World War. Vanier was a founding member of the French Canadian 22nd Battalion of the Canadian Expeditional Force (later called the Royal 22e Régiment) and received the Military Cross in 1916. In 1918, he suffered gunshot wounds in the chest and both legs during a battle in Chérisy, France. This, unfortunately, led to the amputation of his right leg. In 1919, for bravery, Vanier received another Military Cross and was appointed to Distinguished Service Order. In 1924, he was promoted to Lieutenant Colonel, and one year later took command of the Royal 22e Régiment.

Vanier married Pauline Archer on September 29, 1921. They had five children.

In 1921, Vanier's diplomatic career began when he became aide-de-camp to Governor General The Lord Byng of Vimy. In 1928, he played a role in Canada's military delegation for the disarmament of the League of Nations. In 1939, he became the King's Envoy Extraordinary and Minister Plenipotentiary to France. But he was forced to give that up when Nazi Germany took control of that country. In 1942, he was promoted to Major-General and, two years later, became Canada's first ambassador to France.

While some Quebec residents felt that Vanier betrayed his French heritage when he became governor general, nothing could be further from the truth. When he moved into the official residence at Rideau Hall, he asked that bilingual signs be installed at the main gates. In countless speeches, he tried to push Quebec separatism aside by emphasizing how Canadian unity would help anglophones and francophones live together peacefully.

Though he had a heart condition, Vanier still toured Canada with Pauline, and encouraged people to strive for better things in life. In 1962, he initiated the Vanier Medal of the Institute of Public Administration of Canada and, in 1967, he created the Vanier Awards for Outstanding Young Canadians. He also served as Chief Scout of Canada and established the Canadian Conference for Family.

On March 5, 1967, Vanier died of heart failure. But he left behind a Canadian legacy that will live on for years to come.